The Treasure Coast is a region of the U.S. state of Florida. It is located on the state’s Atlantic coast, comprising Indian River, St. Lucie, and Martin, and in some definitions, Palm Beach counties. The region, whose name refers to the Spanish Treasure Fleet lost in a 1715 hurricane, evidently emerged from residents’ desire to separate themselves from Miami and the Gold Coast region.

All of the Treasure Coast is shielded from the Atlantic Ocean by narrow sandbars and barrier islands that protect the shallow lagoons, rivers, and bays. Immediately inland, pine and palmetto flatlands are abundant. Numerous lakes and rivers run through the Treasure Coast, notably the well known Indian River, a part of the Indian River Lagoon system. 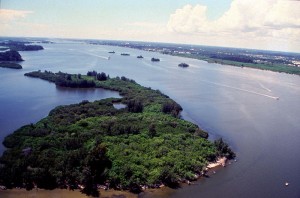